August was finally the time for us to take a longer vacation after cancelling 3 trips already due to COVID-19. While we had a nice long weekend in Pertisau, we wanted to visit friends and family in Bulgaria. The big challenge was flying in times of corona, but it wasn't so bad after all...

We were a bit worried how we were going to avoid crowds at the airport and on the plane. However, the organization everywhere was perfect!

There were a lot of things done at the airport to protect both the travellers and the staff:

Even thought we were flying on Thursday, I've never seen the Munich airport so empty. It was like a scene from an apocalypse movie - everything closed and barely any people around. Looking at a flight tracking app, there were also almost no flights at the otherwise very busy Munich airport. 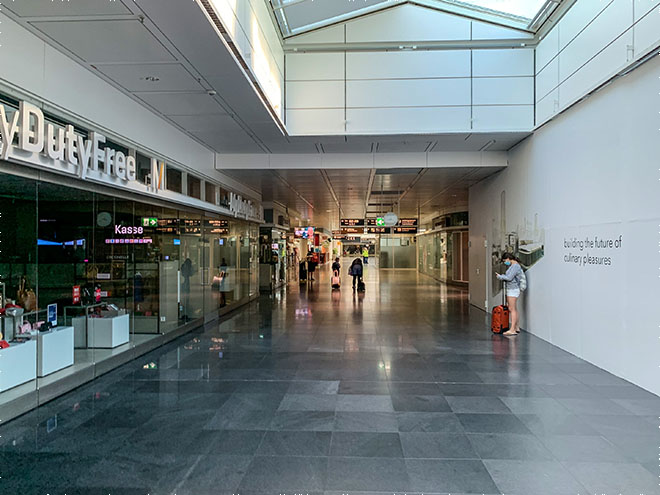 All shops at Munich airport closed 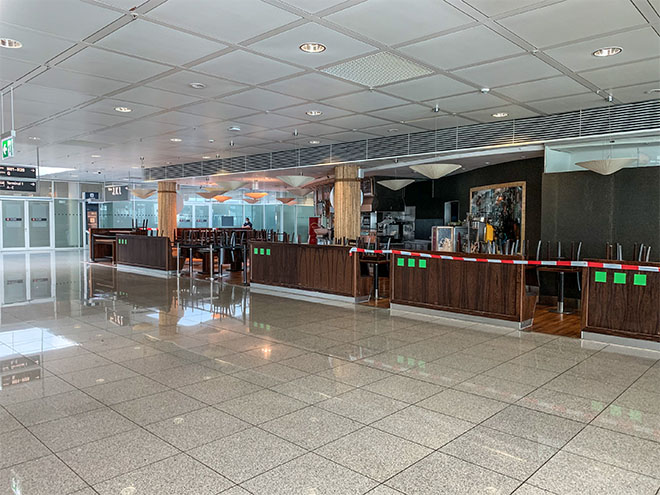 Most cafes were closed as well 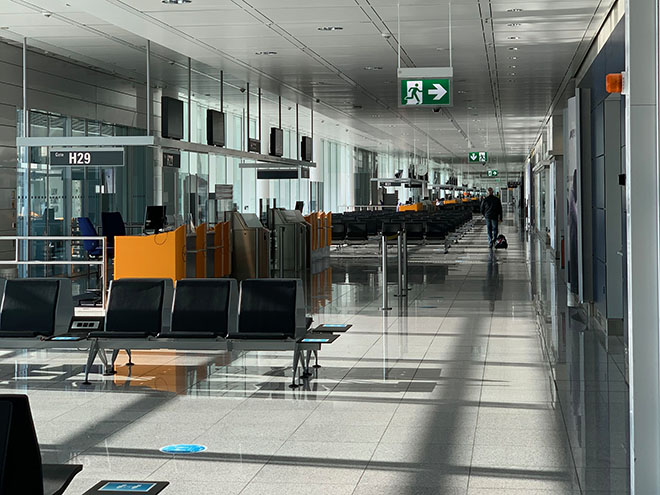 There were barely any people walking around

This meant there was plenty of space for Leo to run around and release some energy before the flight. This is an important strategy for flying with a kid!

A friend of mine flew the next day from Munich as well. She told me that there were more people at the airport, but still much less than usual. One reason could also be that we were flying outside Schengen, while she was flying on a domestic flight. The two areas are separated on different floors. 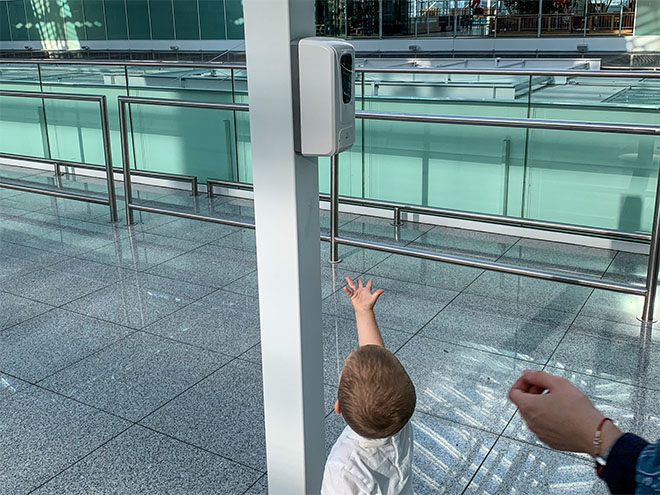 Leo wants to disinfect his hands as well 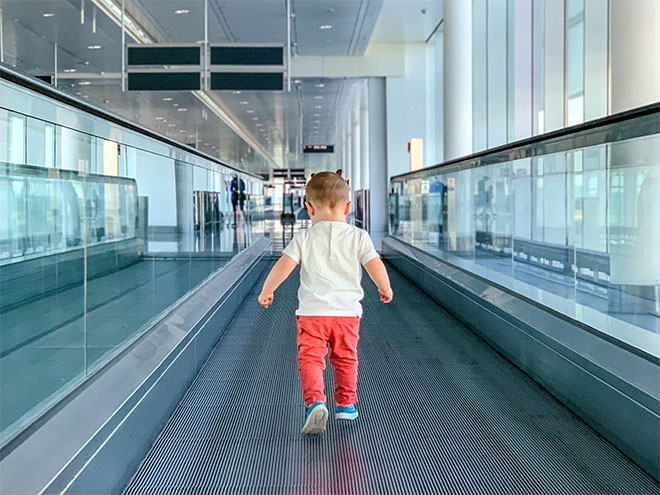 Leo running around the airport

While it is not too difficult to keep distance to other people at the airport, this is not really possible on the plane. Fortunately, there is some evidence that the airplane's ventilation system is helping stop the spread of the coronavirus.

Air circulation & filtration does seem to matter. The fact that we haven't seen large outbreaks linked to planes (even over longer flights) is interesting. Planes circulate & filter air frequently - so perhaps this can successfully prevent airborne transmission. ✈️💧🌬️

However, we wanted to play it safe and decided to buy N95 masks - €11 each 🤦‍♂️. In this way, we wanted to have some more protection for ourselves. Our attempts to make Leo wear a mask failed miserably. In the beginning, he was really excited to wear a mask like us. The excitement lasted 60 seconds...

The plane itself was a small Embraer 195 with 2 seats per aisle, which meant that nobody was sitting next to us. Wearing a mask was obligatory for the whole time on the plane. We could take off the masks only for a quick snack or to drink water. The on-board service was quite limited and everything was packed - simple cakes and small bottles of water. From what we could see, people really stuck to the rules and didn't take off their masks for a longer time. 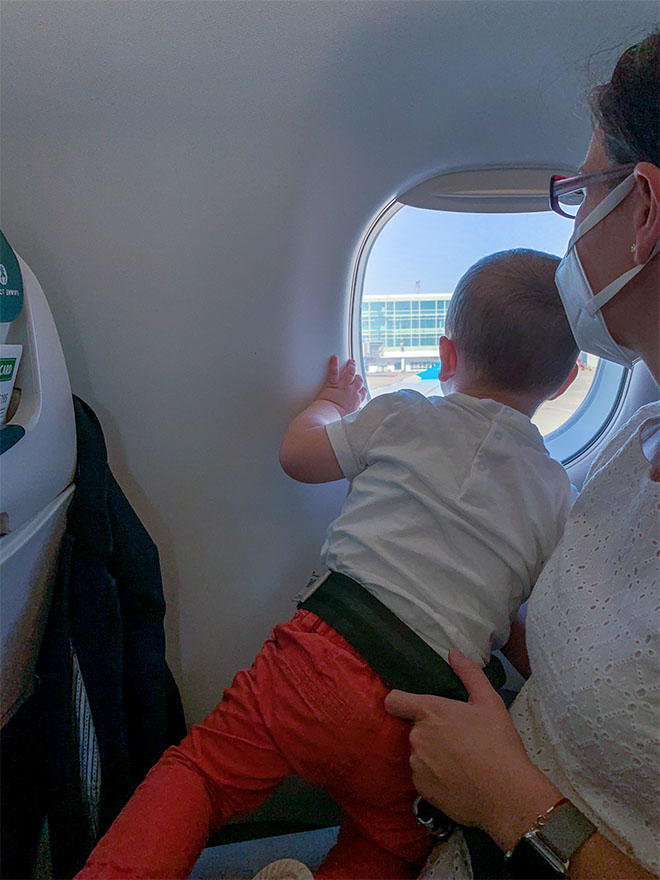 Leo on the plane

Sofia airport was similarly empty and we managed to get through quickly. On the plane, we were handed a declaration to fill with our travel information and seating on the airplane (presumably for tracing). However, nobody at the airport cared to collect it. When we entered the airport, there were temperature checks with a hand thermometer with questionable quality. It didn't take too long, though.

The arrivals hall was very empty, because only people that were arriving or departing were allowed to enter the terminal building. All others had to wait outside, but this is fine for a small airport like the one in Sofia. What made a good impression was that the airport staff made sure that everybody was wearing their masks properly. 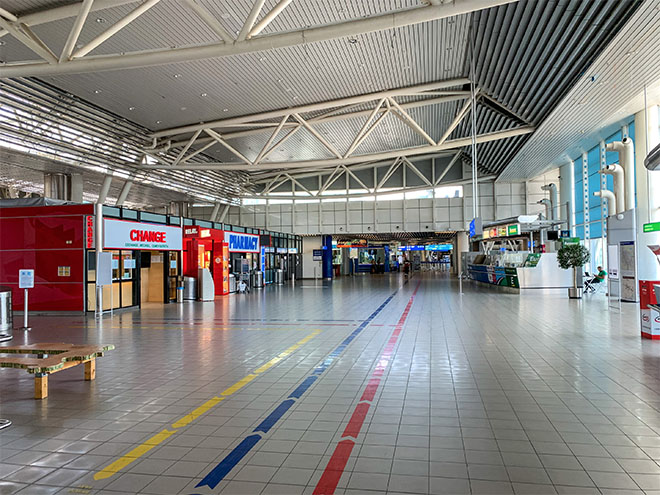 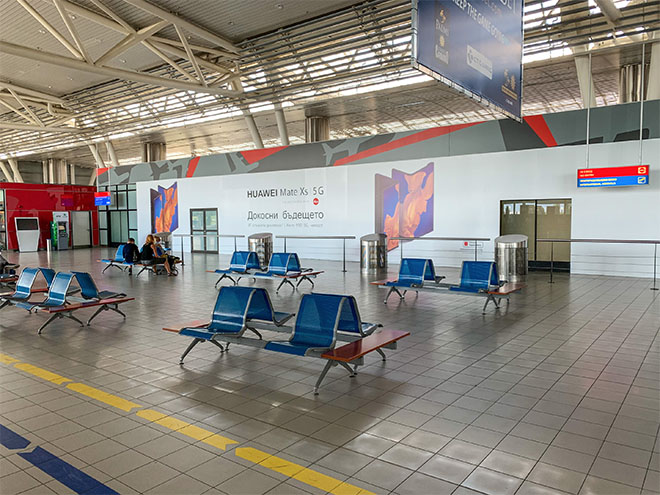 People that are not flying need to wait outside

I won't go into many details regarding our stay in Sofia, but we made sure we stayed isolated from everybody as much as possible. We either had a whole apartment to ourselves or rented an Airbnb. We met friends and family only outside, kept distance and wore masks every time we had to briefly get inside. While the experience wasn't as usual we had a great time both in Sofia and a couple of days on the beach in Burgas.

It was disappointing to see that very few people are wearing a mask properly. Many were covering only their mouth or chin or didn't wear a mask at all even in stores. Restaurants, cafés and bars are all open with full capacity and it seems that most people think that this is just a normal flu. 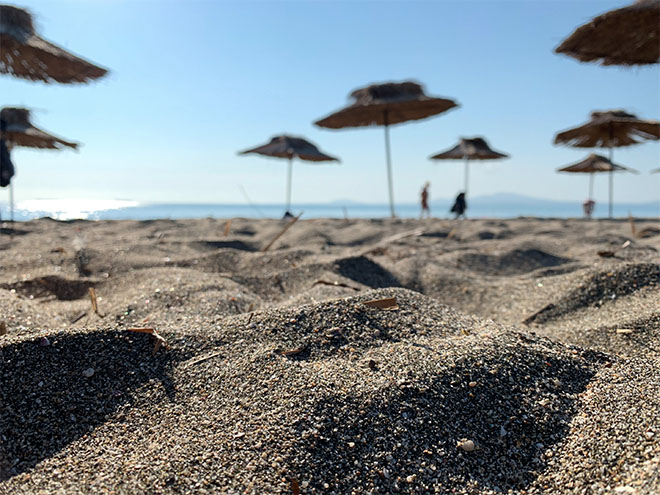 On the beach in Burgas 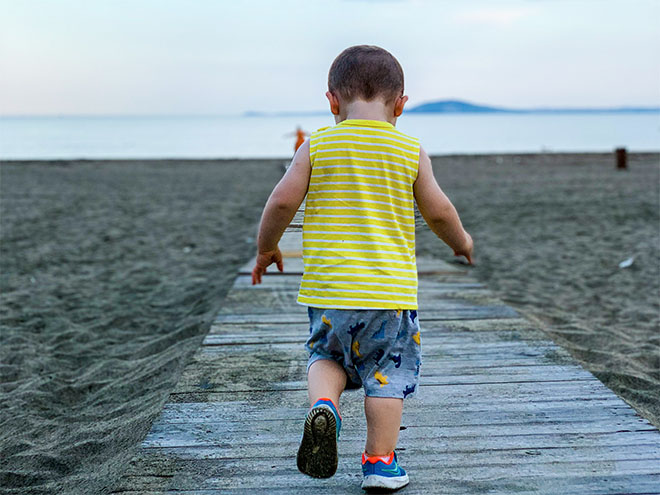 Leo running on the beach 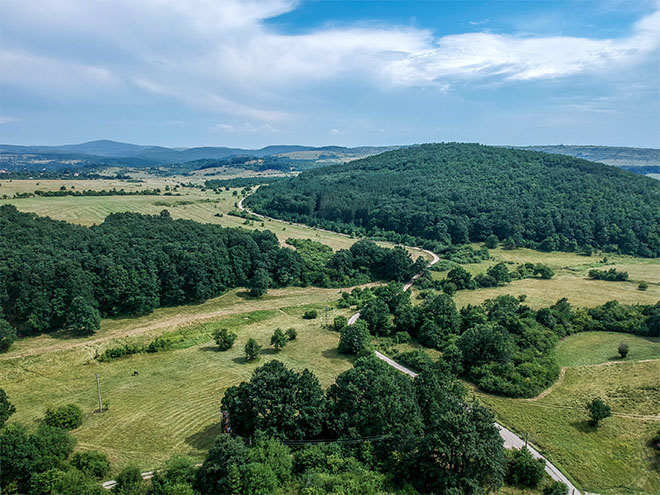 The mountains close to Sofia

The experience flying back was very similar, but this time there were more people at the airports. At the airport in Munich (like all other German airports) all arriving passengers are allowed to do a free coronavirus PCR test. We decided to do it, because there was a risk for Bulgaria to be declared as a risk area in the next days. We wanted to have a proof that we didn't have the virus. This was important for going back to the office and for Leo's day care.

We were really impressed with how the testing was organized. The whole thing took less than 20 minutes and we could pass everywhere with our luggage cart and stroller. Most of the wait was also outdoors with plenty of space to keep distance to other people.

We got the results on the next day, less than 24 hours after the test. They were all negative. 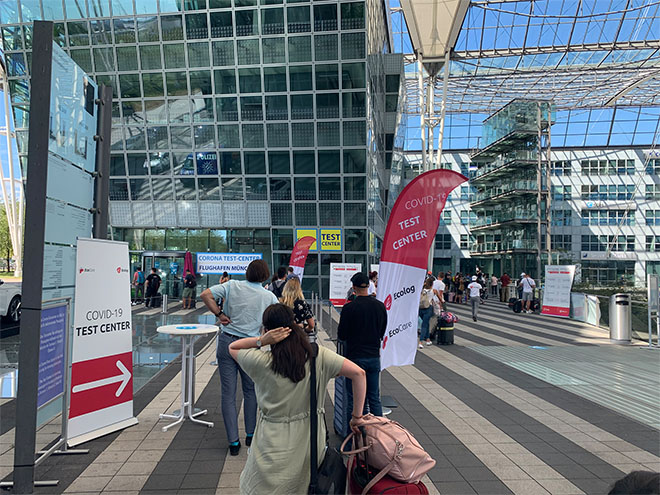 It wasn't so bad in the end

Overall our experience flying in times of corona wasn't that bad. Lufthansa and both airports in Munich and Sofia did a good job to make travelling as safe as possible. However, we will still be cutting flying as much as possible in the future, as long as the pandemic is ongoing.

One more thing - the mess with the plane tickets

The rebooking of our tickets was the part that turned out to be one of the most complicated. We booked the tickets for our August vacation back in January. I was proud that I could use a trick that saved us €200.

Example of how I saved 20% on my last booking 👇

The trick works when you can book two return flights with the same destinations. In our case one trip to Sofia in April for Eastern and one in August. You can then swap start and end points in the middle (see image below).

You can save money, if the tickets starting from Airport B are cheaper than Airport A. In our case, booking a return flight from Sofia (through the Bulgarian Lufthansa office) was €100 cheaper than from Munich. 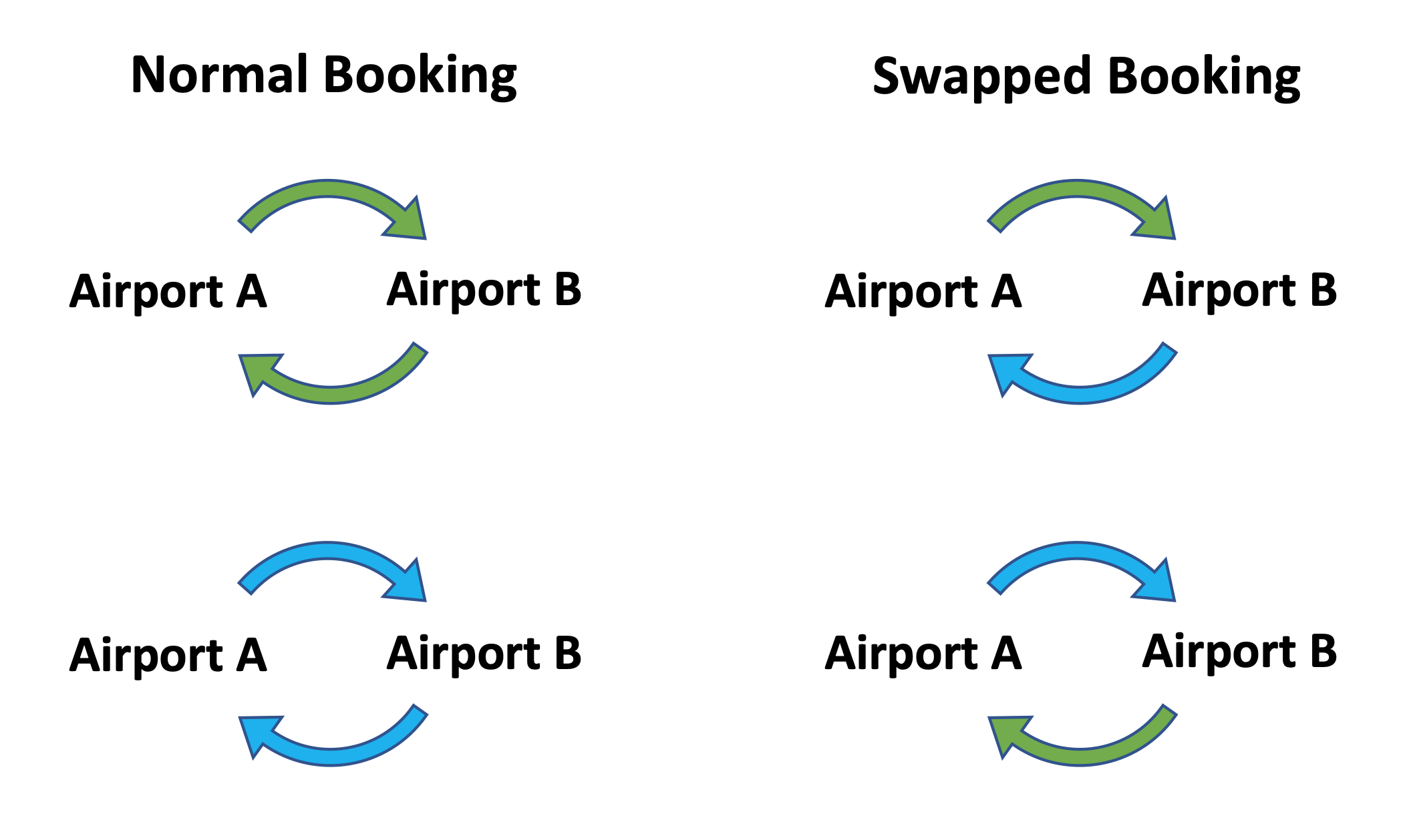 Saving money on flights by swapping the order of the destinations.

The problem was that due to the pandemic all of these flights were cancelled and we had to rebook them for new dates. Unfortunately, Lufthansa was quite slow updating their online system, so rebooking had to be done by phone. And guess what - we were not the only ones rebooking flights. So, I had to wait almost two hours on the line. In the end it turned out that the German hotline could only change the reservation for one of the trips. For the other one I had to call the Bulgarian phone number...